The operating principle of centrifugal purifier depends on the difference in specific gravity of the two liquids and solid particles.

Let us take the example of settling tank where fuel is stored and because of the difference in the specific gravity of water and fuel (water is heavier) the water and solids gets collected at the bottom part due to the effect of gravity.

mathematically this can be expressed as

now the separating force is much higher and the heavier particles will move outward where solid particles accumulate and water will passed through water outlet line.Depending on the density of oil,its temperature and line of interference will before between oil and water,inside of this line there will be oil which passes through the top disc and dirty oil inlet pipe.
Outside of this line is what passes between top disc.

A ring fitted at the top of disc stack from where water is passing out is called gravity disc.Oil maybe of different densities,so the interface changes.To create the correct line of interface between water and oil it is very important to select correct gravity disc size.

The function of gravity disc are as follows

◆ Back pressure is maintained by gravity disc. 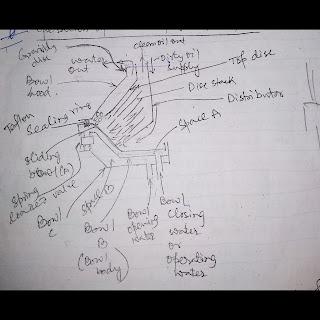 The figure above shows the arrangement of self cleaning type centrifugal purifier,in which there are number of Disc or disc stack placed in between bowl hood and distributor bottom conical disc.

Once the purifier reaches it’s operating RPM,Bowl closing water is supplied which pushes the sliding bowl hydraulically upward and the Teflon sealing ring fitted into the groove of sliding ring gets pressed against the bowl hood rhus makes an effectiveseal.Now sealing water is supplied into the purifier till it’s come out from water outlet line.Afterwards dirty oil is fed into the purifier and due to the action of centrifugal force water and heavy solid particles move towards outer Periphery and oil moves inward due to difference in their specific gravity.
Thus a line of interference is formed between water and oil.Oil passes between discs.The purpose of multi disc is to separate the liquid into thin layer and create shallow settling distance between discs and improving separation of oil from heavier liquids and solid particles.Purified oil passes through the clean oil outlet pipe and water moves out through the passage between oil outlet Pipe and gravity disc.
The inner diameter of gravity disc controls the position of line of interface. When there is too much accumulation of sludge in the bowl.Periphery,feed oil operating water supply isolated and bowl opening water is supplied for few seconds which hydraulically passes the spring loaded valves downward and this causes operating water from space A to drains and the sliding wall slides down,thus the accumulated sludge gets removed from the purifier due to the action of centrifugal force.After the disludging operation, normal operation is restored..

How to use nomogram

A nomogram which is chart,is provides by the purifier maker.This nomogram is to be used for selecting the correct size of gravity disc.This chart has following parameters. 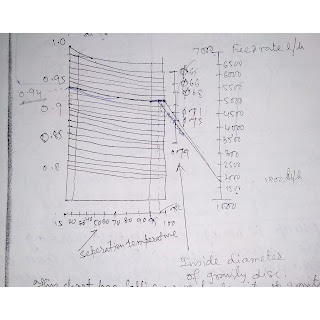 this chart has, falling curves for a specific gravity
and vertical line for temperature.

as shown above, let the specific gravity of oil at 15 degree celsius in 0.94, separation temperature is 98 degree Celsius, feed rate is 1800 l/h.
from the intersection between falling curve of specific gravity of 0.94 and the vertical line of 98 degree Celsius,draw horizontal line to reach the vertical line of hundred degree Celsius. now the right end of the line and the point at 1800 L/h to be connecting a straight line now read the point of intersection of this straight line on the line for inner diameter of gravity disc.this Falls at 79 mm

What is Line of interface ?

Line of interface is the boundary of layer between the separating liquid and it is important to maintain inside the bowl of the centrifugal separator to attend the effectiveness of purification.

In Purifier, at the disc stack periphery, water globules and solid particles continued to move out towards the bowl wall with the water being sandwiched between the solids and oil, which Orient itself towards the bowl Centre.The boundary at which substances meet are known as interface.

To gain the fullest advantage from the disc stack the line of interface for e-lines to be located outside the disc stack but within the water outlet baffle.

2.By controlling the back pressure of the purified oil discharge line.

how dO you change purifier to clarifier

● open up the Purifier and set the Bind disc At the bottom of discuss stack.

● the water outlet is blocked by a seal on the gravity disc.

Purifier is a centrifuge, which is arranged to separate water and solid impurities from oil.

clarifier is a centrifuge, which is arranged to separate finer solid impurities from the oil.

how to change purifier from H.O to D.O?

● Replace the gravity disc,which is a smaller than the heavy oil.

Pure D.O purifier can not change to H.O,because it has no heater.

Pure clarifier cannot change to purifier,it has no water outlet.

Difference between purifier and clarifier

4.blind disc on the top of disc stag.

2. one outlet for Clean oil.

Clarifier is a centrifuge which remove only solids,not water.

In clarifier no requirement for sealiling water when started .

It is a centrifuge in which the dam ring or gravity disc is replaced by a blank disc with no aperture.

It is a stationary impeller mounted in a chamber at the neck of bowl.

It’s function is to convert the rotating energy of the liquid into a pressure head.

To prevent oil passing out of the water side on the start up , it is necessary to put water into the bowl until the water shows at the water discharge.The bowl of a purifier is in effect sealed by this water.

means discharge of oil in the water phase

2.Density of a specific gravity of oil.

2. density of oil at this temperature.

3 desired throughput of oil and by using of nomogram.

Cause of excessive vibration on purifier

6.motor speed to high or too low.

Why have not get enough rpm when purifier is running

3.Excessive sludge in the bowl

8.vertical shaft and horizontal shaftb are out of alignment.

Mariners Point is a leading web platform which provides the complete solution for the mariner. We work for your education and happiness. So, keep in touch and don't forget to share our post.
Contact us: kumarsanjeev919989@gmail.com
© Mariners Point | All Rights Reserved